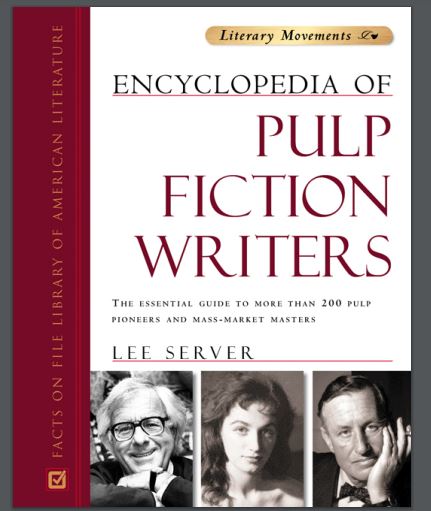 If you’re a pulp fiction fan, especially during its glory years in the first half of the 20th century, you may have limited your reading to such writers as Frank Gruber, Lester Dent or Dashiel Hammett and the like.

Be informed that there are hundreds of other pulp fiction writers as good as , if not better than the abovementioned pulp fiction giants were.

Their works are worth exploring for the themes and subjects they dealt with.

The book is authored by Lee Server who specialises in pop culture and literary history. His other works include, Ava Gardner: “Love Is Nothing”, Handsome Johnny: The Life and Death of Johnny Rosselli: Gentleman Gangster, Hollywood Producer, CIA Assassin and Robert Mitchum: “Baby I Don’t Care”

The author says, ” This volume attempts to follow the threads of pulp fiction over more than a century through profiles of more than 200 writers—the good, the bad, and the sometimes worse, from some of the 19th century progenitors of pulp to men and women practicing the tradition to this day.”

Yes, Encylopedia of Pulp Fiction Writers offers a good enough compilation of biographical information on famous pulp fiction writers and the unsung ones.

An example of an obscure pulp fiction writer is Achmed Abdullah . The name suggests he was of Middle East origin. Be surprised to learn that he was a Russian who went by the name Alexander Nicholayevitch Romanoff .

He wrote adventure fiction tied to far-flung Asian and African locales. He was a sought-after writer in Hollywood for his insider knowledge of the East as reflected in his stories.

If you’re a writer, you can draw inspiration from some of the anecdotes in the book.

Take for instance Richard Allen, who wrote about juvenile deliquency and skinheads.

Richard Allen knew very little about the world of antisocial groups. Howver, he went on to write about them without turning down any assignment.

He did his research though. He spent his mornings driving around the notorius parts of East End of London in search of background details for his stories. He wasn’t welcome in those areas. However, when he told the anti-social elements that they would be appearing in his books, he was welcomed with open arms.

“They bought me beers and verbally fought for top billing. And I had enough material for typing.”

His novel, Skinhead, was written on a seven-day deadline.

You don’t only learn factual biographical information about pulp fiction writers but also some fun-to-read anecdotes.

There’s one relating to Frederick Faust, well-known as Max Brand. He had at least half a dozen pen names to use for all types of stories he wrote.

Mark Twain’s sister introduced him to a publisher who didn’t have much faith in him. The publish gave him paper and a plot and sent him off.

Faust returned later in the day with a completed story which saw publication in the March 1917 edition of All-Story.

Faust was a speed writing machine who earned $8281 in the first 9 months of his job – a princely sum during those times.

Some writers who may not deserve the pulp fiction writer tag also make the list.

Issac Asimov was listed partly because he wrote under the pen name Paul French. He sold his first story to Amazing Stories in 1939 and later went on to contribute to Astounding, a ‘respected’ science pulp magazine during that period. That was where Asimov wrote his acclaimed Foundation stories.

Ray Bradbury a reknowned mainstream writer is another case in point, not to mention Harold Robbins.

From the biographical entries of the writers one learns that most of the pulp fiction writers didn’t have the luxury of waiting for inspiration to strike before writing .

As Dwight V. Babcock put it, “It’s write or starve.”

A luxury not many modern writers are ‘blessed’ with.

Opening Up World of Pulp Fiction

Unless you were living in the golden age of pulp fiction, you would not know most of the writers active during the period.

Encyclopedia of Pulp Fiction Writers will certainly introduce you to some exciting works by little-known pulp fiction writers.

The book introduced me to Pierre Souvestre and Marcel Allain, who wrote Fantomas, the exploits of a super criminal who who always gives the police a slip. Though classfied as pulp fiction it has been published by Penguin Classics and made into films.

Encyclopedia of Pulp Fiction Writers would be an interesting read as it encapsulates the hidden worlds of pulp fiction writers and their sometimes ‘colourful’ lives.

How Do I Write My First Book ? A Mind Trick To Get You Started