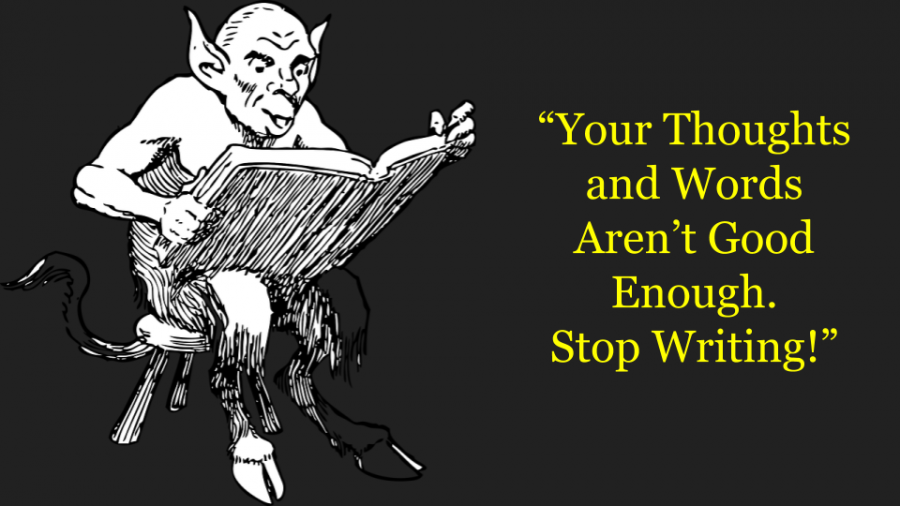 As writers we are often assailed by numerous  false feelings that seem so real that we make them part of our belief system.

These ‘demons’ do more damage to our writing progress than any other obstacle we face in the writing process.

One terrifying demon is voice that tells us that our thoughts and words aren’t important enough to be published. A  loud and clear voice often reminds us that nobody would be interested in our writing.

This thought alone will throw a spanner into the works of your writing productivity and hinders you from producing further works although one part of you is itching to do so.

This feeling, mind you, doesn’t trouble only beginning writers, but also published writers.

Published writers often feel what they have published is a lie. It didn’t deserved to be published and somehow ‘cheated’ its way through to publication. It was a fluke shot and nothing more.

Reason for this Feeling

The reason for this feeling is foolishly comparing what you’ve written with those of other published writers. And thinking that your writing can’t match theirs.

Yes, your writing will never match theirs. Your job is not compete with others. You may learn from other writers but your focus is not to write like them in style and substance.

Your job is to develop your own voice and style and communicate your thoughts in your own unique way. You’re not supposed to compare yourself with others, especially with those you feel are more successful than you’re.

How Professional Writers Overcome the Demon

Professional writers, especially the prolific ones, have this feeling, too. Only difference is they overcome it with this  thought, “My last piece isn’t good enough for me. So, what I’ll do is write the next piece better. It’s human to have this feeling of inadequacy, but the best I can do is do my best and move on. My next piece will not satisfy me. That’s alright. I’ll do better in the piece after that.”

Inexperienced writers, most of whom suffer from a lack of confidence think, “I have written something that’s not good enough. My next piece is certainly not going to be better. So, what’s the point of carrying on?It’s going to be a waste of time and energy.”

Result? Victory for the demon. The next time you try to write, the demon makes you hear the same voice.

Most beginning writers seem to be stuck on one piece they have written and fail to look at the exit door.

Have you read about writers who claim they don’t read whatever they’ve published. Do you believe them? I do.

Would you go back and take a look at the homework you did while you were in kindergarten or the test papers when you were in the first year of college? No, you know it would do nothing to help you.

What You Wrote Yesterday Doesn’t Matter

Apply the same principle to writing. What you wrote and published yesterday doesn’t matter. You’re always looking at the current piece you’re writing with an eye on nthe next piece you’ll be writing.

Unless you’re needed to make corrections to your previous piece, don’t go back to it.

Look forward to the next piece and the next. That’s the only way to progress in your writing.

The next time this demon visits you, look at it in the face and say, “I’ve no time for you because I’m busy writing my next piece.”

Recognise that this voice mocks your ability and belittles it. Recognize that and pay no heed.

That’s the secret sauce to keep on writing and publisghing.

Failed at Blogging? 3 Comeback Strategies You Could Put Into Action Now